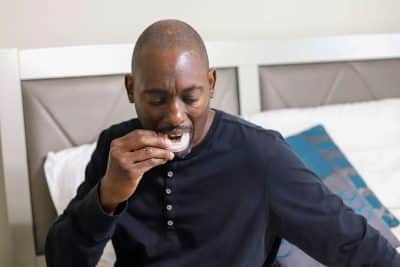 If you’re not familiar with CPAP (which stands for “Continuous Positive Airway Pressure”), then count your lucky stars that you’ve not needed to be hooked up to one of these machines while you sleep at night. CPAP has been the go-to treatment modality for obstructive sleep apnea for many decades. CPAP requires wearing a mask/breathing tube apparatus while you sleep. The CPAP machine keeps the air flowing into your airway, so you don’t stop sleeping throughout the night due to loss of air.

What is Sleep Apnea?

While there are three types of sleep apnea, OSA (obstructive sleep apnea) is, by far, the most common, with over 20 million people suffering from this serious sleep disorder each year. Obstructive sleep apnea is characterized by the collapsing of the soft tissue in the airway; the collapsed airway causes you to gasp and choke while sleeping as you try to get air. People suffering from sleep apnea in Miami Beach may stop breathing for ten seconds or more per night, and the breathing cessations may occur hundreds of times each night.

The most common signs and symptoms of sleep apnea include:

Sleep apnea surgery is reserved for the most extreme cases, and sleep apnea dentists in Miami Beach are excited about the promising results that Oral Appliance Therapy is delivering for weary sleep apnea sufferers. OAT works by pushing the lower jaw forward while you sleep to prevent the soft tissue of the airway from collapsing. The oral appliance, which many say resembles a mouth guard, allows you to breathe comfortably throughout the night and get the air you need to sleep well and stay asleep.

Oral appliances to treat sleep apnea are comfortable, easy to clean, and painless. You can take your appliance wherever you travel, and all you have to do is remember to put it in your mouth before you fall asleep. Your Miami Beach sleep apnea dentist will create an oral appliance made for your mouth, and the results will amaze you. Why suffer another day with sleep apnea in Miami?

If you’re tired of being tired, and you’re ready to start getting the peaceful, restful sleep you need, then please call SoBeDentist™ in Miami Beach, Florida at (305) 535-2225 today to schedule your sleep apnea treatment evaluation. You may also fill out our online contact form, and one of our Miami Beach dental team members will reach out to you shortly.