Sleep apnea disorder is a condition in which you stop breathing for periods while asleep. To qualify, the frightening stoppage in breathing needs to last at least 10 seconds but can last much longer. In those with mild sleep apnea, moderate sleep apnea, and severe sleep apnea, this happens 5 – 15 times per hour, 15 – 30 times per hour, and 30 or more, respectively. Imagine if you stopped breathing for 30 seconds, 30 times an hour. During an eight-hour window of “sleeping,” you’re body would experience no oxygen for two whole hours. To end these episodes, your brain panics and awakens you briefly to resume breathing.

You might be wondering, “What are some possible side effects of sleep apnea?”. While there are many common side effects, including loud snoring, excessive daytime sleepiness, morning headaches, and more, you may be wondering if some symptoms you’re experiencing might be tied to your sleep apnea. Here are some of the more unusual sleep apnea symptoms that you may have questions about.

Bad Dreams or No Dreams Associated with Sleep Apnea? 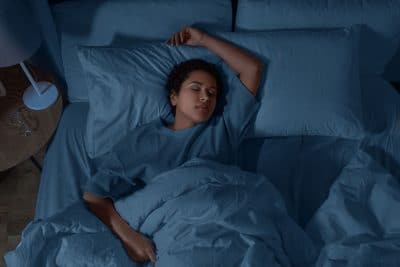 You experience four different stages in your sleep cycle. The first three stages of sleep are classified as Non-REM, and the last is called REM sleep. You must progress through the first three stages to get to the last stage, REM. Several things happen during REM sleep, but it’s usually characterized by a paralyzed body and an active mind. During REM sleep, you dream. If you are repeatedly awake because you aren’t getting enough oxygen, you’ll never reach REM sleep, or at least not very often. Therefore, you won’t dream as much as people without sleep apnea.

You can have incredibly vivid nightmares when you have sleep apnea and make it to REM sleep. Dreams are somewhat mysterious, but they’re a compilation of what’s going on in your brain. When you’re experiencing a lack of oxygen and dreaming, your brain may be sending you a signal that something isn’t quite right. It’s common to dream of trying to breathe underwater or in space, strangulation, choking, or claustrophobia like being stuck in an elevator. These dreams can be rightfully disturbing and affect your day with feelings of anxiety.

Is the Inability to Focus a Symptom of Sleep Apnea?

Sleep apnea interferes with your ability to focus. When you have sleep apnea episodes, you can’t spend enough time in each stage of sleep. Usually, you will float between stages one and two and spend little time in stages three and four, where your brain is doing the vital work of cleansing toxic buildup from functions performed throughout the day. Without this cleansing process, you’ll experience some amount of brain damage to your frontal lobe. Your frontal lobe is the part of the brain that allows you to plan, make decisions, and concentrate. The longer your sleep apnea goes untreated, the more severe your brain damage can become, and your ability to focus will continue to wane.

Does Sleep Apnea Make you Use the Bathroom at Night?

Waking up to use the bathroom frequently throughout the night is another unusual symptom of sleep apnea. Typically, your body produces a hormone called the antidiuretic hormone. This hormone lets your kidneys know what to do with the liquid in your body. With more antidiuretic hormone production, your kidneys will recycle the fluid to keep you hydrated throughout the night. Less of this hormone is produced during the day, which allows your kidneys to turn your body’s liquid into urine—the constant awakenings signal your body to secrete less antidiuretic hormone in those with sleep apnea. Naturally, you’ll have to use the bathroom more often at night compared to someone with healthy sleep.

Can Sleep Apnea Cause You To Sleep Walk?

Your sleep apnea could be causing you to sleepwalk, sleep eat, or sleep talk. While you are constantly briefly awakening during the night to resume breathing, the line between wakefulness and sleep can become blurred. The part of your brain that controls memory and consciousness may be asleep, but the part that controls movement may be awake. This can result in unusual activity while you are seemingly asleep. People who sleepwalk due to sleep apnea have no recollection of the event. Not only is this symptom unusual, but it can also be dangerous if you were to leave the house or operate a vehicle while unconscious.

Does Sleep Apnea Cause Sleep Paralysis?

Can Sleep Apnea Cause Dry Mouth and Drooling?

Having a dry mouth and drooling can seem like opposites, and they are, but both can be caused by sleep apnea. People who have sleep apnea often mouth breathe at night to get more oxygen. If your nasal passages are small or blocked, you’ll be more inclined to breathe through your mouth, which can dry it out and interfere with your saliva production.

Along the same lines, a dry mouth from sleep apnea mouth breathing can increase saliva production, which will cause you to drool.

Are you experiencing some of the symptoms of sleep apnea in Miami Beach? If so, contact your Miami Beach sleep apnea dentist, Dr. Maria Escoto. By working with a sleep dentist, you can eliminate these unusual symptoms and the more dangerous sleep apnea symptoms. Call Dr. Escoto at (305) 535-2225 or request an appointment online to get started with your sleep apnea treatment today.